Academics should blog, Jurgenson from Cyborgology tells us, to engage with those outside of the academy.

Now—should we be so lucky that a non-academic takes the time to read these posts—the whole world can see the arguments that previously took place spaced out over years in journal articles, or were raged at with local colleagues over a bottle of wine.

The latest example is the blogstorm over post-racist vs. post-racial between Fabio Rojas, Tressie McMillan Cottom, and Eric Anthony Grollman. I’m grateful for the chance to see a debate between three great scholars. One of this blog’s goals is to let readers behind the academic curtain and so I’m going to venture a few comments on the debate.

The argument focuses on whether one might characterize American society as ‘post-racist’ as opposed to ‘post-racial’, a term bandied about by so many believers in an utopian world free of racial consequences,  as discussed in Bonilla-Silva’s Racism Without Racists.

As I have recently articulated, debate lately focuses quite a bit on rhetoric over actions. We focus on pulling out new undiscussed areas of privilege or attacks against authors, attempting to divine their intentionality or personal biases from their comma placement. As such, even though throughout the posts I have been filling out my Derailing Bingo Card, I want to constrict my comments to three areas: the usefulness of the ‘post-racist’ concept, incorporating intention into a structural framework, and the burden placed on academics of color to participate in this discussion. 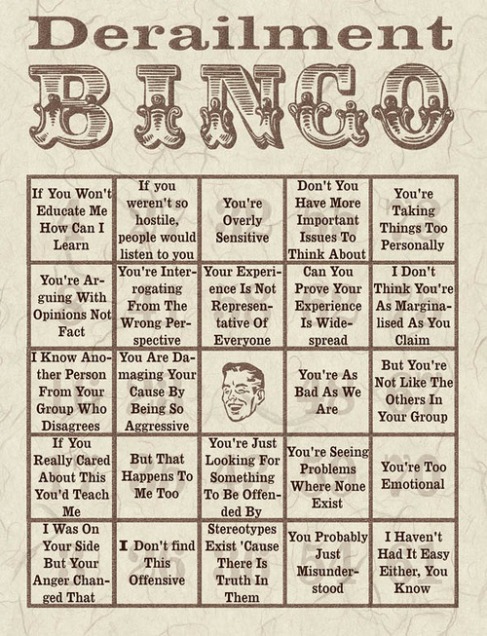 As a scholar of race and ethnicity, I believe two things:

As usual with dialogue, the two sides of this debate are not discussing equivalent propositions. Each scholar places their emphasis on one of these, responding to criticisms of the other as though they were attacks on their own position.

I’m arguing for both. Mustafa Emirbayer once told me while we were discussing an article I didn’t care for, “Yes, it is terrible, but what is positive that we can get out of it?” A concept can be a useful, while still not an accurate description. I can disagree with the accuracy of the ‘post-racist’ concept, while seeing it as a valuable vision of future society.

I do not want to live in a post-racial society. If moving ‘beyond race’ is the goal, I will pass. Many white individuals see race as a stumbling block that society needs to get past. Once we no longer see race, once it no longer has any consequences, once it has no influence on the life chances of anyone, then everything will be better. That perspective is completely wrong.

A post-racial world is a white world, where people of color have abandoned their racial identities and distinctive cultures to assimilate into the white belief that white people have no ethnicity. A post-racist world is more palatable. We should all be proud of our cultural heritage. Even if I’m not always proud of every aspect of my southern/military/Texan cultural upbringing, I like brisket and y’all is a real word. That’s got to count for something. However, in a post-racist world, that upbringing would not qualify me for the lowest difficulty setting in the game of life.

It is important for my scholarship that I have a clear vision of the outcome that I’d like to accomplish. The post-racism concept gives us that vision. Explaining the difference between post-racism and post-racial, especially to students, illuminates the joy of race, something I’ve been thinking more about since ASA when Tey Meadow and Kristen Schilt discussed the pleasures of gender. ‘Post-racist’ is useful.

The evidence overwhelmingly rejects our being in such a post-racist society. Cottom over two posts, lays out the case that even if—and it’s a big if—white Americans are less interpersonally discriminatory and hold less damaging views of people of color, even if—and it’s a bigger if—the American legal system can be said to not use race explicitly, then the overwhelming disparities, implicit use of race, color-blind interpersonal racism, and structural racial arrangements classify American society as a system of white racial domination.

However, there is a difference between a system that relies on color-blind racism and stigmatizes explicit discrimination and the pre-civil rights era. A thought has been preoccupying my theorizing lately: How can we give people credit for good intentions or unintentional action, while not dismissing the damaging consequences of those actions?

Two outcomes are undesirable. We don’t want to alienate beginners, who are just starting down the path of grappling with racial privilege and social consciousness, by declaring that they are unable to make mistakes. We also don’t want to excessively praise people for doing something just slightly less terrible. For example, while teaching my, largely white, classes at the University of Wisconsin-Madison, I taught students that the preferred term is people of color. Inevitably, I’d get at least one paper that reversed the terms and gave an impassioned screed against the mass incarceration of colored people. What should we do in such a situation? My solution was often to sit the student down, explaining the difference and the two terms different histories. I don’t think we should say, “You are a terrible person for doing such an offensive thing” any more than we should say, “Gold Star! You felt badly when you did something terrible. Don’t worry, that means you’re not really a racist.” If we truly see racism as a social system of white domination, and not as an interpersonal slight or a personality flaw, then we need to treat it as such. In my opinion, this means granting that cracking one’s eye to social consciousness and the ability to see privilege is exceptionally difficult. We should neither dismiss the hard work that individuals, and society, has done to expunge explicit racism nor should we excessively praise these advances as final movement-ending accomplishments.

One aspect of Grollman’s original piece that has not drawn discussion is the rather remarkable fact that it was written at all. As he notes, silence is endemic to graduate students, especially marginalized graduate students. “Are Black scholars obligated to talk about race? Some of us can’t,” his title reminds us. While the original New York Times debate had multiple viewpoints on the matter, Grollman’s observation that the road to tenure silences academics of color was absent.

Why the silence? Grollman and Cottom hint at the first reason: fear that speaking up will label academics of color as the perennial “outraged” Angry Black Person™. As a white institution, the academy favors even race scholars that do not make waves within their departments about race. Once the appropriate diversity boxes are checked, the conversation is supposed to move on (see Ward’s 2006 book Respectably Queer for a great analysis of this kind of white diversity politics).

I would argue though that there are two other reasons, hidden in the formulation of the question. First, the notion that Black scholars or academics of color more generally have the obligation to talk about or study race derives from white privilege. White scholars also have a race. However, the consequence of this recognition has often been a turn to whiteness studies, an overcorrection to previous outsiders studying marginalized groups by implying one can only study people like themselves, an impossibility.

Second, I’d argue that the burden placed on Black intellectuals here is akin to that Du Bois argued for through the Talented Tenth. While there are many criticisms of that formulation, I believe there is an additional one that goes unacknowledged. It is incredibly exhausting. In my latest research on coming out, “Queers in the Line of Fire: Goffman’s Stigma Revisited” forthcoming in The Sociological Quarterly in March, I discuss how many of my participants found educating others—answering personal questions, correcting privilege, speaking as a spokesperson for their group—to be exhausting. My participants of color explicitly connected the feeling they experienced as similar in kind, but not content, to that which they experienced on a daily basis whenever they attempted to educate others about race. While some participants said that they remained committed to the project of social justice through coming out and educating others in their daily lives, for most that burden was too much to handle on top of the other structural indignities of being queer. As a result, they disengaged.

Therefore, I argue that the onus of race research, racism discussions, and public discussions of race needs to fall on white scholars. While we too face the structural silence of graduate school and the tenure-track, we have substantial privilege to speak up without being labeled in ways that scholars of color will be. White scholars must work against the notion that only Black intellectuals should speak about racism against Black people, because racism is produced and propagated by white institutions that white scholars have privileged access to. Scholars of color also should not have to engage in not only the daily exhaustion of educating others about race and racism in their personal lives, but then also to come to work and speak as though they are spokespeople for an entire group.

It is time white scholars pick up that burden to advocate the vision of a post-racism society. When scholars make mistakes, and we all will, those mistakes should be acknowledged, without excessive forgiveness that ‘at least they were trying.’ However, we must find some way to incorporate intentionality into our structural models of racism, if we hope to have interracial dialogue at all.

6 thoughts on “The Post-Racist Debate”